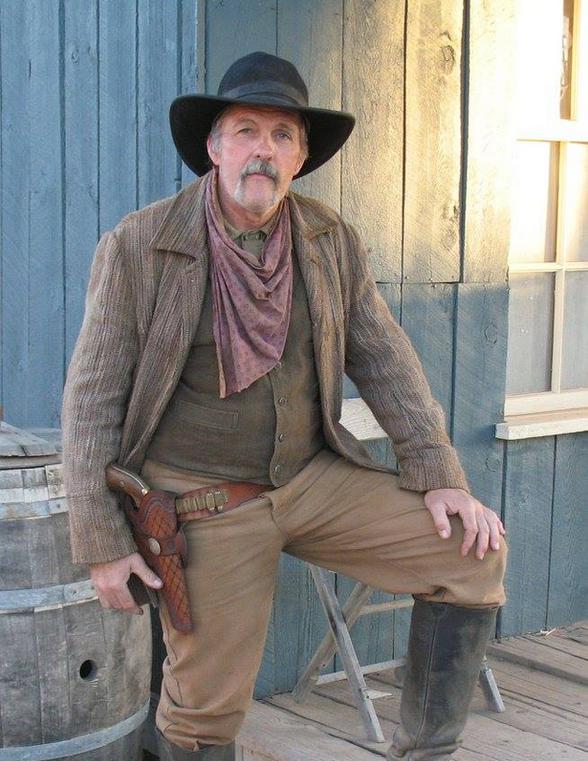 ​Albertwas born in Denver, Co, and raised on a farm outside of LaSalle, a small town 50 miles north of Denver. At age 27, he left the farm, moving to Denver for a year, on to Phoenix, AZ for less than a year, finally making his way to Albuquerque, NM in 1986. Albert has done many different things since arriving in the 'Land of Enchantment', including practicing and teaching massage therapy, working as a residential teacher, teaching everyday life skills to adults with developmental disabilities, and as a woodworker - building rustic furniture out of recycled wood. Along the way, though, Albert also got the 'acting bug' - taking his first acting class in 1992. In addition to acting, he is also a writer, director and Independent film producer. He currently lives in Albuquerque's south valley with his 6 dogs - all rescues -  and jokingly refers to his property as the 'south valley dog sanctuary'.

"It Don't Mean Nothing" was Albert's first endeavor as a screen writer, director and producer (at age 55 - so it's never too late!), winning the 'Audience Choice Award' in 2014 at the Intendence Film Festival in Denver CO.

He wrote, directed and produced his second film, "Uncle Max" in 2015. During it's two year festival run, it garnered 11 wins and an additional 3 nominations, including the award for "Best New Mexico Film" at the Gallup Film Festival in 2017.

Albert also studied filmmaking at the Central New Mexico Community College (CNM) in Albuquerque, where he shot his third film, "The Backroom", for his 'finals' in his editing and sound design classes. During it's festival run, it had 10 wins, with an additional 7 nominations, including an "Award of Excellence" for "Best Comedy" at the Southern Shorts Film Awards in Roswell, GA.

His fourth film was a silly but fun micro-short - and 'faux' commercial - for a product called "Not Tonight Dear" - a sort of opposite to viagra. ;-) It had a short festival run, with no wins, but it was nominated - twice - for "Best Micro-Short Comedy" at the Austin Revolution Film Festival in Austin, TX - as well as the Bare Bones International Film Festival in Muskogee, OK.

Albert's fifth film - and his first drama - was "A Bitter Reckoning", which deals with the heavy subject of assisted suicide. During it's two year festival run, it garnered 27 wins, with an additional 30 nominations, including a "Best Actor" award from the Laughlin International Film Festival in Laughlin, NV; "Best Actor" -AND- "Best Supporting Actor" awards from the Show Low Film Festival in Show Low, AZ; "Best Drama" from the Mindfield Film Festival in Albuquerque, NM;  and a whopping 9 "Awards of Excellence" from the Southern Shorts Awards, in Roswell, GA for - "Acting", "Cinematography", "Directing", "Editing", "Music", "Production Design", "Screenwriting", "Sound Design", and "Best Drama". It also had it's last screening at the famed 'Chinese Theater' in Hollywood, California on Feb. 21, 2020, during the Golden State Film Festival  (and right before the pandemic hit).